By 1992, Tim Burton had brought Batman back to life. His first two movies were effective, and Warner Bros. wanted, badly, to leverage demand with Batman: The Animated Series, which originally aired in primetime on Fox, paid for with twice the typical budget for an animated show of its kind. This was a darker and more grownup, Batman. And the studio needed a voice for him.
A year earlier, Kevin Conroy, a Juilliard-trained Broadway actor, was about to audition — reluctantly — for the role. He was no comic geek, having been raised in a strict, traditional Irish-Catholic family outside New York City, where recreational activities were more likely to include baseball and jigging with his Gaelic-speaking Grandma. Producers gave him a crash-course in the Batman storyline before having him read the script. “As soon as they described his schizophrenic lifestyle, it bugged me,” Conroy says. “I thought, Wait a minute, he is the Bill Gates of Gotham. He is the most eligible bachelor. Everyone knows who he is. And he puts on a cape, and no one recognizes him? Come on.” In the five minutes he had to prepare, Conroy decided to give the superhero a new dual-voiced reading — the naïve scion’s lilt and his alter-ego’s deep growl — fundamentally altering the legacy of a comic book he had only passing knowledge of. Now imagine if Bruce Wayne and Batman had exactly the same speaking voice. It seems wrong. For that, the world has Kevin Conroy to thank.
It didn’t really matter, in theory. The comics had dialogue bubbles. Live-action Batman pre-Conroy had one voice and a costume change. Conroy felt differently, and used his trick to shade in some psychological background: “If he sounds that different, where does the voice come from? It has to come from the pain,” Conroy says. “I decided that the Bruce Wayne persona, the public persona, is the performance, and the Batman character is who he is when he is most natural. When he’s putting on the cape, he is becoming himself.” Everyone’s got issues. Conroy got the part, but he still had work to do. “The Batman voice was the voice you’ve heard. But the Bruce Wayne voice was a high, light, playboy voice with a lot of irony and humor in it,” he says. “As the studio finished the animation, they realized the show was so dark that Bruce Wayne’s light sound was jarring.” Conroy was asked to re-record the first five or six episodes, cementing the more subtle voices heard in that series, its spin-offs, and video games ever since. 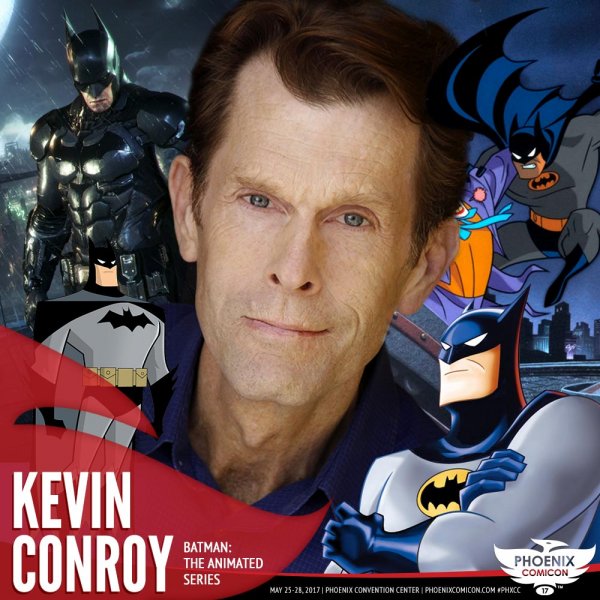