Currently tallying well over 500 roles in his career, Christopher R. Sabat (@VoiceOfVegeta) has been an active part of the voiceover industry since 1998.

Most noted as one of the early employees of FUNimation Productions and the Voice Director for Dragonball Z, he voiced many DBZ characters including Vegeta, Piccolo, Yamcha, Mr. Popo, Korin, Burter, Shenron, Zarbon, Guru, and more.

Most recently, he can be heard as Allmight on My Hero Academia, Kyoma Mabuchi on Toonami's Dimension W, Rath and Geoff in Gearbox’s hit shooter Battleborn, Batou in the acclaimed Ghost In the Shell: Arise series, Goro Sasabe in Free! Eternal Summer, Sakuya Togane in the second season of Psycho-Pass, Jason in Tokyo Ghoul, and Mondo in Dangan Ronpa.

In 2004, Christopher founded Okratron 5000, a well-established voiceover production studio based in Dallas, Texas which he continues to run to this day.

When he's not in the studio, he likes to play with his adorable daughters, make electronic music, and buy vintage Pumas and airline glassware on eBay. 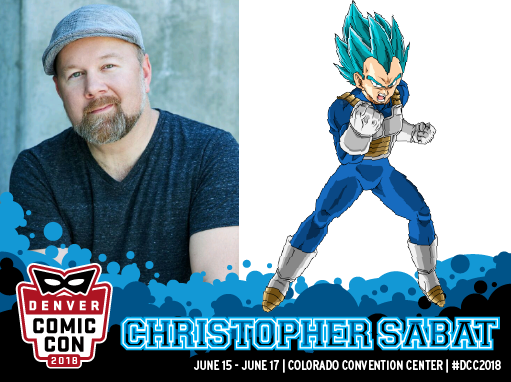