"So mama, wanna be my date?"
To celebrate the 25th Anniversary of the Teenage Mutant Ninja Turtles, the voice of Michelangelo comes to DCC! If you’ve watched just about any other animation over the last 20 years, you’ve heard the voice of Greg Cipes. In addition to Mikey in TMNT, Greg is the voice of Beast Boy in Teen Titans and Teen Titans Go!, Kevin Levin in Ben 10, Iron Fist in Ultimate Spider-Man, and dozens of other animated shows. You’ll also recognize him from many movies and TV shows, usually as the surfer dude – including Dwight in Fast & Furious and Chuck in The Middle.

A mockumentary about one man's mission to change the world, Cipes' Un Amor explores the comedic trials and tribulations of attempting to solve the homeless epidemic in Los Angeles, California. He also created and hosts the annual Love Street Festival, which takes place July 5th in Laurel Canyon, as a “celebration of the culture and community” of Laurel Canyon. As if all that isn't enough, Cipes is the front man for the reggae/hip-hop band Cipes and the People. 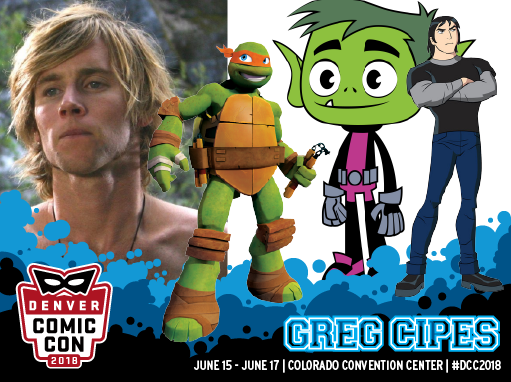