Mark Sheppard was born in London, England and began his film career in Jim Sheridan’s “In The Name Of The Father” playing Guildford Four member ‘Paddy Armstrong’ alongside Daniel Day-Lewis. An accomplished musician, he has recorded and played drums for The T.V. Personalities, Nikki Sudden, Robyn Hitchcock, The Barracudas, Light A Big Fire, School Of Fish and They Eat Their Own, among others. On stage, he has won several theatre awards, including The 1992 Drama Critic’s Circle Outstanding Achievement Award for his performance in “A Cock & Bull Story”. He may be best known for his television work, as Romo Lampkin in “Battlestar Galactica”, Badger in Joss Whedon’s “Firefly”, Ivan Erwich in Day 5 of “24”, plus roles on “The X-Files”, “CSI”, “Star Trek: Voyager” and a host of other characters in film and television. Sheppard currently plays ‘Jim Sterling’ opposite Timothy Hutton on TNT’s “Leverage”, the Director of The Ring Organization in NBC’s “Chuck”, the Demon ‘Crowley’ in “Supernatural” for the CW, mysterious operative ‘Mr. Valda’ in SyFy’s “Warehouse 13”, and now Canton Everett Delaware III in the sixth season of the BBC’s “Dr,Who”. He has lent his voice to various video games and commercials as well, from “The Conduit” to “Dragon Age: Origins” and Bear Grylls’ “Man vs. Wild”. 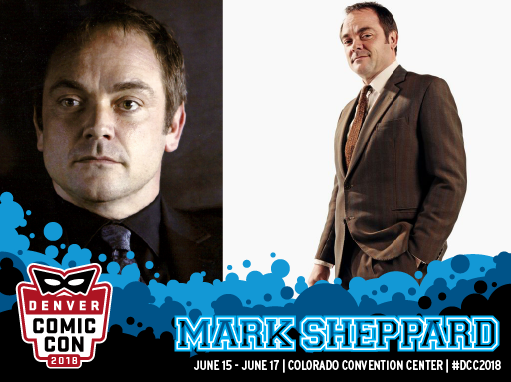