Christopher Paolini began writing his epic Eragon series at age 15, and after polishing the first volume over the course of a couple of years, self-published the fantasy novel. In summer 2002, author Carl Hiaasen, whose stepson read a copy of the self-published book while on vacation in Montana, brought Eragon to the attention of his publisher, Alfred A. Knopf, which is part of Random House. Knopf published Eragon in August 2003. Eldest, which continues the adventures of Eragon and the dragon Saphira was published in August 2005, and in December 2006, Fox 2000 released their movie adaptation of Eragon in theaters around the world. The third and fourth volumes of the “Inheritance Cycle”, Brisingr and Inheritance, have been released since, and The Official Eragon Coloring Book will be available just in time for and at DCC 2017!

Although Christopher will one day return to Alagaësia, he is currently finishing a science fiction novel, which we will ask him about when he visits Denver Comic Con! Visit Paolini.net and Facebook page https://www.facebook.com/christopher.paolini.39 to tell him how excited you are that he is coming. 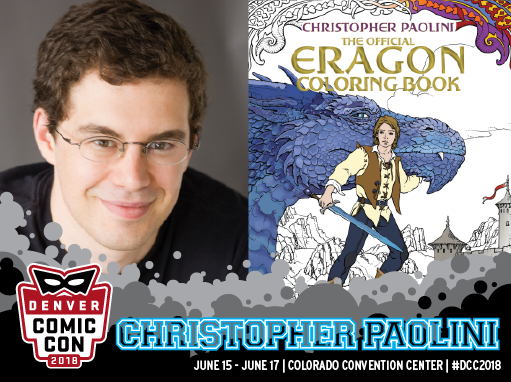