Edgar Cantero is a writer and cartoonist from Barcelona who speaks 3 languages: Catalan, Spanish and English. His latest book is the irreverent, Enid Blyton-meets-Lovecraft horror-comedy mashup Meddling Kids, a New York Times bestseller. After his 2007 debut Dormir amb Winona Ryder, the highbrow Catalan literary tradition soon lost influence on him in favor of Hollywood blockbusters, videogames and mass-market paperbacks. The punk dystopian thriller Vallvi (2011) was his last book in Catalan before switching to English with a paranormal thriller, The Supernatural Enhancements (2014). Edgar's material ranges from short stories to screenplays and often features women kissing, stuff exploding, and ill-timed jokes. His third novel in English, the enticingly-named This Body's Not Big Enough for Both of Us, is coming July 2018, and he will have previews for us at DCC! 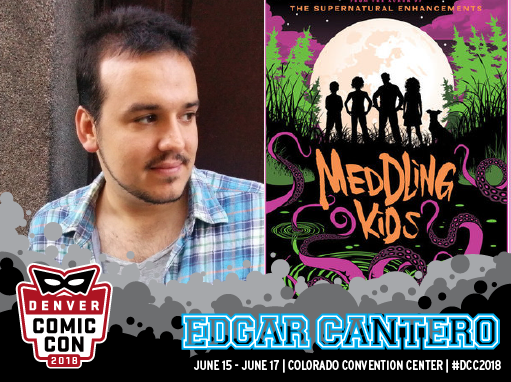