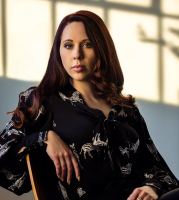 Alexis Tipton is a versatile voice actress known best for her roles as Lucina in Fire Emblem
Heroes, Lala Satalin Deviluke in To Love Ru, Kid Trunks and Gotenks in Dragon Ball Z Super,
Mei Hatsume in My Hero Academia, and Mina Carolina in Attack on Titan. She has also
performed in animes Psycho-Pass, Full Metal Alchemist: The Sacred Star of Milos, Fairy Tail, Yuri on Ice, and My Bride is a Mermaid.

Additionally, she has voiced characters in video games such as Borderlands 2, Blazblue, and
Tales of Zestiria. Additionally, she is an ADR director for Restaurant to Another World and
Dragon Goes House-Hunting