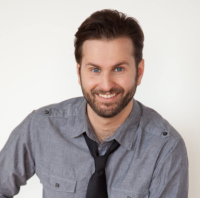 Ian Sinclair is a renowned voice actor. He played the title roles in Toriko and Space Dandy. He is also known for his roles as Brook from One Piece, Azami Nakiri from Food Wars!: Shokugeki no Soma, Whis in the Dragon Ball Universe, Nile Dok in Attack on Titan, and Mezo Shoji in My Hero Academia. He has also played roles in Tokyo Ghoul, Fruits Basket, Psycho-pass, and Fullmetal Alchemist: Brotherhood.

Sinclair has also done voice acting for multiple video game franchises. He is known for his role as Baron Flynt in Borderlands, Zaveid in Tales of Zestiria, and Gordeau the Harvester in Blazblue: Cross Tag. He has also performed in Borderlands 2 and 3 as well as Fire Emblem Heroes.