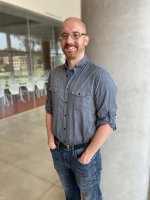 Christopher Totten is an Assistant Professor and lead faculty for Kent State University's Animation Game Design program. He is also the founder of Pie For Breakfast Studios, an award-winning Northeast Ohio-area indie game company. He has done work as an artist, animator, level designer, and project manager in the game industry. He holds a Masters Degree in Architecture with a concentration in digital media from the Catholic University of America in Washington, DC. Chris is an organizer for the Smithsonian American Art Museum Indie Arcade and lifetime member of the International Game Developers Association (IGDA).

He is the author of An Architectural Approach to Level Design, published with CRC Press/AK Peters in 2014 (2nd edition published in 2019) and Game Character Creation in Blender and Unity, released by Wiley Publishing in 2012. He is also the editor of the collected volume, Level Design: Processes and Experiences. His current game project is the successfully crowdfunded Little Nemo and the Nightmare Fiends.