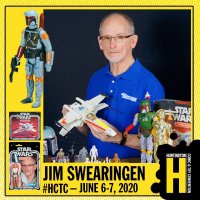 James (Jim) Swearingen was born and grew up in Cleveland, Ohio. As a young man his interest in art and design led him to the five-year professional practice program at the University Of Cincinnati. Over those five years he worked at General Motors, Phillips/Norelco and a small toy company, Rainbow Crafts where PlayDoh was invented. He began his professional career in 1972 at Kenner Product located in Cincinnati, Ohio.

Over his tenure at Kenner he worked on many toy lines including Spirograph, Easy Bake Oven, PlayDoh and more. In the mid-1970's the Preliminary Design was formed under the direction of Dave Okada. The department was formed and charged with developing new product concepts and reviewing television and movie properties looking for great products. "The Six Million Dollar Man” television show was one of Jim’s entertainment based product design projects.

In early 1977 as a Senior Designer Jim was instrumental in Kenner's acquisition of the Lucas Film, Star Wars license and the development of the toy line. In 1980 he moved from the Preliminary Design Department to a position as Marketing Product Manager working on the pre-school line and then taking on the Strawberry Shortcake line, from American Greeting, for five years.

In 1985 Jim moved to Hasbro Toys in Rhode Island as Marketing Director working on the introduction of a number of girls toy lines including Jem, Moon Dreamers and a few more.

In 1990 Jim returned to Kenner to work in both design and marketing positions before leaving to form his own design-consulting firm in 1992. S.O.E.D.A., Inc. provided conceptual design and development support for a variety of toy and consumer product manufacturers. In 2007 the firm was closed and Jim retired. He now lends his experience and talents as a consultant on special projects.