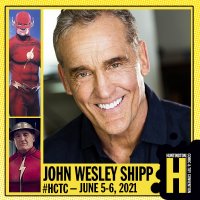 John Wesley Shipp starred as The Flash when CBS brought the series to television in 1990 after the theatrical success of Batman. In 2014, John went on to portray Henry Allen, father to Grant Gustin’s Scarlet Speedster on the CW’s hit series The Flash, followed by Earth 3’s Flash, Jay Garrick. In fact, he had played four roles in the “Flash” multiverse: Barry Allen, Professor Zoom, Henry Allen, and Jay Garrick.
In 2018, John appeared in the “Arrowverse” crossover, “Elseworld” reprising his role as “90’s Flash / Barry Allen,” once again donning the Classic “Flash” suit to the delight of fans everywhere. Warner Bros. TV announced on September 9, 2019, that John will appear in the “Crisis on Infinite Earths” crossover scheduled to air starting on December 8, 2019. The “Crisis” crossover will span across all 5 of the CW’s superhero shows with the conclusion airing in January 2020.
John has recently signed a five year, multi movie deal with the Hallmark Channel. He has appeared on the “Ruby Herring Mysteries” as the Father of lead actress, Taylor Cole. John’s debut on the Hallmark Channel was on September 29, 2019, in the episode titled, “Her Last Breath.” John has also workshopped the play, “Hank and Jimmy Build an Airplane” about the lifelong friendship of Henry Fonda and Jimmy Stewart despite their political differences and romantic rivalries. John also stars in the just released movie “Night Sweats” as “Nick Frankenthaler” in this based on a true story thriller.
A constant presence on television for nearly four decades, Shipp took on another iconic role after The Flash that of Mitch Leery, James Van der Beek’s father, on the WB’s coming of age series Dawson’s Creek. He continued with a memorable turn as boxer Lucky Williams, love interest to Julianne Phillip’s Frankie, on Season 5 of NBC’s hit drama Sisters, and terrified audiences with his haunting arc as Isaac’s abusive father and Beacon Hills gravedigger, Mr. Lahey, opposite Daniel Sharman on MTV’s drama Teen Wolf.
John is a two-time Emmy Winner, garnering his first award for his performance as the duplicitous Douglas Cummings opposite Julianne Moore on As The World Turns and his second the next year for his guest turn as Martin Ellis on Santa Barbara - making him the only actor to win consecutive Emmys for two different daytime dramas. Other memorable daytime roles include stints on Guiding Light, One Life To Live, and All My Children.
Other television credits include: Lifetime’s hit Drop Dead Diva, CBS’s JAG and CSI: NY, Showtime’s The Outer Limits, TNT’s The Closer, the Lifetime movies Christie’s Revenge and Road Rage, and ABC’s seminal cop drama NYPD Blue. He also starred in the film Hell and Mr. Fudge, and The Sector with Lance Henriksen and Richard Tyson