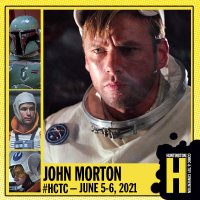 John is best known as Dak, Luke Skywalker's back-seater in the Battle of Hoth, The Empire Strikes Back. He also appeared in the film substituting for Jeremy Bulloch as Boba Fett on Bespin when
Boba utters his famous line to Darth Vader, "He's no good to me dead." He is a regular contributor to Lucasfilm’s Star Wars.com and the U.K.’s Jedi News.
Beyond the Galaxy, fans know John from roles in epic films like A Bridge Too Far, Superman II and Flash Gordon and in the BBC television series Oppenheimer. A veteran performer, he appeared on London’s West End stage and New York’s Off-Off Broadway as an actor and musician. When not acting, singing or playing guitar, he was a lighting and sound technician affiliated with London’s White Light Electrics working on such classic productions as The Rocky Horror Show, the Royal Shakespeare Company’s Nicholas Nickleby and thought- provoking plays by celebrated playwright David Hare.
A writer and published author, John’s Backstory In Blue: Ellington At Newport ’56 is a behind- the-scenes look at a legendary moment in American cultural history when a performance of the great
Duke Ellington Orchestra almost caused a riot at the third Newport Jazz Festival. Currently, he is in discussions with a number of film producers to package and develop his screenplay adaptation of Backstory In Blue. John’s stage plays have been produced in New
York and Washington, notably his award-winning Hubris.