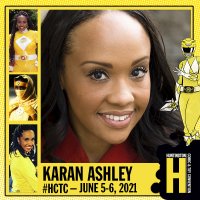 Karan Ashley has had a career as an actress, singer, TV host, radio DJ, reality star, writer and TV and film producer. Karan Ashley is currently Producing her graphic novel series The Order Icarus Rising and Xaos- the movie.
She began her entertainment career as a child singer in the girl group KRUSH. They were signed to A&M Records and had their first single, “Let’s Get Together” on the Mo Money soundtrack. They worked under the famous Jimmy Jam and Terry Lewis. With the group they earned a platinum record and had a hit dance song, Let’s Get Together (So Groovy Now.) Karan also had her first acting audition while in the group for Sister Act 2. She didn’t get the part but she got bit by the acting bug and she knew that she wanted to transition into acting.
Her big acting break came when she went to an open call audition and beat out over 10 thousand hopefuls and landed the lead role of Aisha the Yellow Power Rangers on the #1 kids show in America, Mighty Morphin’ Power Rangers. She was able to do over 80 episodes and star in the hit movie “Power Rangers the Movie” produced by 20th Century Fox.
She began to pound the pavement and worked with comedic legends like Steve Harvey, Cedric the Entertainer, Kenan Thomas and Kel Mitchel. She enjoyed guest star and recurring characters on, Hangin’ with Mr. Cooper, The Steve Harvey Show, One on One, The Parkers and Kenan & Kel.
She shifted gears and tried her hand in radio and guest DJ’ed with KKDA’s K104 in Dallas and produced her own web series and talk radio show called Uncensored Talk.
She has also enjoyed a career in writing and producing and has 2 independent film under her belt: Devon Ghost and Unto Thee. She also produced Grow Up Already which was a TV sitcom.
She recently guest starred on the comedic web series Class Dismissed. She reprised her role as Aisha in 2018 on the Interactive Gaming Power Rangers spin-off Hyper Force.
She has worked with many successful companies such as MTV, BET, ABC, Twitch, Nickelodeon, Disney, The WB, 20th Century Fox, Asiatic Productions and formed her own production company KAsh Pictures, LLC and KAsh Publishing INC.
Karan currently travels the world doing personal appearances. She has had the most amazing adventures meeting her fans in Indonesia, United Kingdom, Ireland, Belgium, Peru, Canada, Australia and the United States.