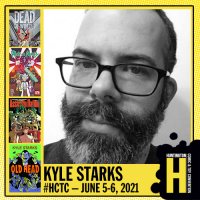 Kyle Starks is a two-time Eisner nominated comic creator from Southern Indiana. He is likely best known as the longest tenured writer and occasional artist for Oni Press RICK AND MORTY comic. His creater owned projects SEXCASTLE, KILL THEM ALL and ROCK CANDY MOUNTAIN have all been optioned for Hollywood use.
He has also worked on Skybound’s ASSASSIN NATION with Erica Henderson, Dynamite Comics MARS ATTACKS with Chris Schweizer and Oni Press DEAD OF WINTER.