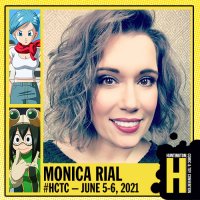 Monica Rial began her acting career at the ripe old age of 12 and went on to study theater throughout high school and college. She attended the University of Houston where she studied under such greats as Jose Quintero, Edward Albee, and musical producer Stuart Ostrow. In the Houston market, she worked steadily in commercial voice over and local film projects. She is a powerful presence on camera with a knack for comedy. She has lent her voice to over 400 animated series playing on various networks, including Nicktoons, Cartoon Network, IFC, and the CW. Her voice can also be heard in numerous video games and foreign language dubs. Monica’s little girl dreams came true when Sanrio chose her to be the voice of Hello Kitty.