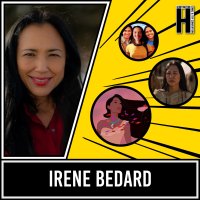 Irene Bedard is a Native American actor, director, producer and advocate. She was born and raised in Anchorage, Alaska and is the daughter of Bruce Bedard and Carol Otton and the granddaughter of David and Irene Otton from the village of Koyuk. She received her Bachelor of Fine Arts degree in Theater from the University of the Arts in Philadelphia. After university, she moved to New York City and was a founding member of the Native American Theater Ensemble, Chuka Lokoli. She has performed on stages including Circle in the Square, Ensemble Studio Theater, Cleveland Playhouse, and the prestigious Joseph Papp Public Theater.
Soon after, she began a career in film and television and has over 100 credits including Lakota Woman for which she was nominated a Golden Globe, Grand Ave produced by Robert Redford, Into The West a Steven Spielberg miniseries, the cult classic Smoke Signals, the voice of Disney's Pocahontas, which she has most recently reprised in Wreck it Ralph 2. She can currently be seen in the Netflix Original series Longmire, Stephen King’s series The Mist for Spike TV, the 444th President of the United States in the Ava Duvernay directed Jay Z Beyonce collaboration, and HBO’s Westworld.
Irene has received much critical acclaim for her performances and garnered numerous Best Actress and Best Supporting Actress awards from such organizations as the Emmy’s, The First Americans In The Arts, American Indian Film Festival, NAMIC VISION AWARDS, Diversity Awards, LA Film Festival, and Sundance Audience Award.
Irene is very honored to be inducted into the 2018 class of the Academy of Motion Picture Arts and Sciences. Irene has been honored as an inductee into the Museum of Western Heritage and was the first Native American woman to be inducted into the Cowboy Hall of Fame, has received honorary degrees from Sitting Bull College and the Institute of the American Indian Arts, and the Alumni Award of Excellence from the University of the Arts. She has been Artist in Residence at Vox Box Arts Collective 501(c)(3) in Los Angeles for 20 years. Has co-chaired the Native American Collection of the Art Train and the American Indian College Funds Flame of Hope Gala.
Irene has made appearances on The Tonight Show with Jay Leno, The Tyra Banks Show, Bill Maher, and The Roseanne Barr Show. She has been photographed by Annie Leibovitz and has been featured in Mademoiselle, USA Today, Native Peoples, and was chosen as one of People Magazines 50 Most Beautiful People. She was a guest at the White House Correspondents Dinner during Bill Clinton’s administration.
She currently serves on the American Indian Enterprise and Business Council Board as the Delegate to the White House and U.N., as well as the Special Consul to the U.N. for the Cities of Peace and the World Indigenous Forum where she is currently working to form a Peace Treaty based on the Values formulated by Standing Rock. She served on the Screen Actors Guild/American Federation of Television and Radio Artists National Diversity Committee, and also served on the National Task Force in support of VAWA for the National Congress of the American Indians, personally delivering 180,000 signatures to Sentaro Baynor's office during her attendance of the NIWRC (National Indian Women's Resource Center) field hearings throughout the United States.