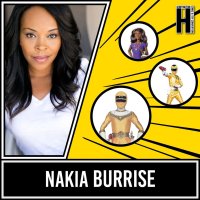 Growing up in Stockton, CA, Nakia was introduced to musical theater and performance in elementary school. She began performing acrobatics by the age of five and later ventured into theater, musical theater, dancing, singing, and modeling. While attending Edison High School in Stockton, California, Nakia auditioned for UCLA’s prestigious theater department. She was the only African American female freshman accepted into the theater department that year. By the time she was a junior at UCLA, her professional career had begun. She booked her first role as a series regular on Power Rangers, as Tanya Sloan, the yellow ranger; while simultaneously recording her first pop album with her singing group, Divine. She has played an array of characters in such shows and movies as Atypical, Barbie’s Life in the Dreamhouse (voice), The Mindy Project, Rebel, Jane the Virgin, Baby Daddy, Murder in the First, Angie Tribeca Hart of Dixie (recurring), Star Trek Continues… Along with her television, voiceover, web series credits, she has appeared in numerous films, national commercials, musicals, and print ads.
In 2012 Nakia launched Sovereignty Entertainment Inc. a production company dedicated to producing family friendly television, web series, and films. Nakia takes great pride, passion,
and joy in producing, writing, and acting! She is currently co-producing a graphic novel series, “The Order: Icarus Rises.”