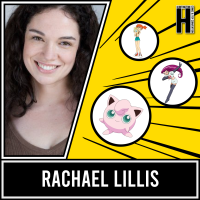 Rachael Lillis is probably best known for her work in 'Pokemon,' playing the roles of Misty, Jessie, Jigglypuff and many other characters
during the first eight seasons of the show. She also played the title character in 'Revolutionary girl Utena', Hela in 'Cubix', Tomoe Ame in 'Teenage Mutant Ninja Turtles' and Danny in 'Sonic X'. Other roles
include Thalia in 'Shadow of the Elves', Intress in 'Chaotic', Mizuki in 'Comic Party', Kanako Ono in 'Genshiken', Dr. Reese Drake, Ursula and Laura in 'Dinosaur King', Micott Bartsch in 'Gundam Suit Unicorn',
various roles in 'Your Lie in April', 'Fate Stay Night: Unlimited Blade Works' and 'Hunter x Hunter' and many others.