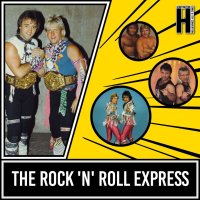 The Rock 'n' Roll Express is a professional wrestling tag team consisting of professional wrestlers Robert Gibson and Ricky Morton. The duo began teaming together in Memphis in the early 1980s, followed by Mid-South Wrestling, followed by a stint with Jim Crockett Promotions.
On February 6, 2017, the WWE announced it would be honoring the Rock 'n' Roll Express by inducting the team into the WWE Hall of Fame at the 2017 WWE Hall of Fame Induction Ceremony on March 31, 2017. On March 20, WWE officially announced that the team will be inducted by Jim Cornette.
The Rock 'n' Roll Express made their All Elite Wrestling (AEW) appearance on the October 30, 2019 episode of Dynamite to crown the inaugural AEW World Tag Team Champions.