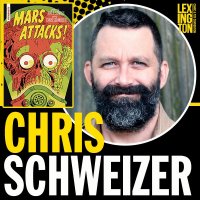 Chris Schweizer is the three-time Eisner Ward-nominated cartoonist behind THE CROGAN ADVENTURES and THE CREEPS graphic novel series. He wrote the DISNEY’S PIRATES OF THE CARRIBBEAN ongoing series, drew and colored the new MARS ATTACKS series in collaboration with writer Kyle Starks, and has written and drawn two nonfiction graphic novels for First Second: FIX A CAR! and ROANOKE: AMERICA’S FIRST MYSTERY. He lives in rural western Kentucky where he splits his time between making comics, drawing historical stuff to post online, and creating wooden figures based on historical and literary figures