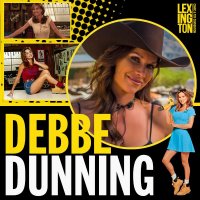 Beautiful and funny? Debbe Dunning is that and much more! That’s why when the producers of “Home Improvement” set out to cast the role of Heidi, the “Tool Time” girl, they remembered Dunning, who had guest-starred on one of the previous season’s most popular episodes.

Born and raised in Burbank, California, Dunning graduated from John Burroughs High, the same high school from which her parents graduated exactly twenty years earlier. Her senior year memories include cheerleading, being the Homecoming Queen and winning the title of Miss Burbank of 1984. That same year, when her parents’ vacation money was stolen, Dunning entered a Miller Beer Bikini Contest in Hermosa Beach and won the $500 prize money, which she promptly donated to the vacation fund. The next weekend she entered another contest, with the same result. Before long, Miller recognized a good thing, put her on a poster and began showcasing her in personal appearances. It was at this point that Dunning realized show business might be the way to go.

Dunning’s first television commercial for Foot Locker followed quickly, as did a plethora of modeling jobs. This dazzling beauty has graced the covers of several sports magazines including Shape, Triathlete and Muscle & Fitness. It wasn’t long before Dunning had more than sixty commercials to her credit, including a Ford spot to the appropriate tune of “Pretty Woman.”

But it was Dunning’s three year campaign for Taco Bell as Louise, the “Run For the Border Girl,” that brought her to America’s attention. With all this TV time, it’s no surprise that Debbe made the transition to acting.

Among her feature film appearances are “Misery Brothers,” “Dangerous Curves” and, most recently, the romantic comedy “Now You Know.”