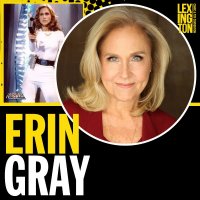 Erin Gray is an actress, speaker, teacher and business leader, whose name became a household one—synonymous with beauty, grace and power.

She has vehemently carved pathways to transformation and social change in each of the last four decades. As a supermodel, she was the first to say “I’m Worth It.”
Two widely watched television roles allowed her to propel a message of strength through womanhood. Initially, as the female commander, Colonel Wilma Deering in ‘Buck Rogers in the 25th Century,’ which was also released as a feature-length film.

Wilma was followed by Kate—the Silver Spoons leading lady, who emulated growth and perseverance as the only stepmother of her time to rise from a company’s Secretary to CEO.

Gray now runs Heroes for Hire—one of the premier talent agencies for celebrity events, making her one of the first (and still few) women to head her own talent agency.
And she still finds time for her work as an avid practitioner and teacher of Tai Chi.

Concurrent with her acting work and celebrity status, she’s committed to remaining philanthropic, winning 11 service awards and being named Woman of the Year by the Los Angeles County Commission for Women. Gray is a fervent believer in the vital need for social change, and that change begins within the self.