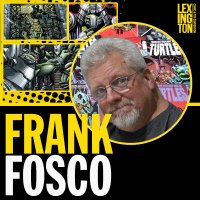 Frank Fosco is best known for his stint on the 23 issue run of Image comics Teenage Mutant Ninja Turtles.

He has done work for DC on Legionnaires, Superman/Elseworlds, Steel, Robin and Zero Hour among other DC works.

Frank contributed with pencils for Marvel on The World’s Greatest Comic Magazine: A 12 issue 40 year anniversary of The Fantastic Four paying homage to Stan Lee and Jack Kirby. He has done numerous backups for Image’s Erik Larsen’s Savage Dragon which includes long runs on Vanguard and Frank’s creation Ethrian.
He was the Artist for Kingstone media: 101 Questions and the Bible volume 7.

Currently, Frank is working doing new covers on the re-issuing of TMNT Urban Legends for IDW. The Image run (Volume 3) of TMNT.