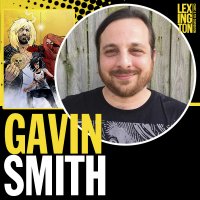 Gavin Smith is a comic artist out of Indianapolis, Indiana. He's the co-creator and artist of Dead Legends from A Wave Blue World, Bethlehem from Heavy Metal, and is the artist on The Accelerators, Ghost in the Shell and several other comics. He's also done projects for Webtoon and AT&T. He also recently worked with Mark Waid on The Good Fight Anthology, and Gregory Graves with Dan Harmon and Brent Schoonover. He's recently had his art featured as pin ups in Deadly Class from Image Comics and Strayed from Dark Horse Comics and is currently developing a couple of different projects that are not yet announced. He is also a 2011 graduate of the Joe Kubert School.