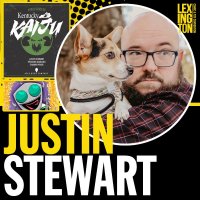 "Justin Stewart is a graphic designer and illustrator who's done work for Disney, Marvel, Sony, Image Comics, and Graphitti Designs. He's also the Art Director for the Lexington Comic & Toy Convention. Justin's latest book, ‘Bleed Leaders’ was successfully funded via Kickstarter and was released in December of 2018. His previous book, 'Kentucky Kaiju', published by Apex Book Company in 2016, is an illustrated field guide to giant monsters that roam the Bluegrass. Justin has worked as a colorist with artist Jim Mahfood for 15 years, coloring his art most recently on 'Grrl Scouts: Magic Socks' from Image Comics. He also worked with Jim on IDW's 'Miami Vice: Remix', Marvel's 'Howard the Human', and Image Comics 'Marijuanaman' with musician Ziggy Marley. Justin also runs and organizes the liveart crew ‘Six Bomb Boards’. See more at justin3000.com."

On a side note - Justin has been one of LCTCs biggest supporters since day 1. There are not many people who have done as much to help us out over the years! Justin has spent his entire adult life trying to further the art scene in Lexington and for that, we are eternally grateful! Justin's art can be seen all over the convention floor at LCTC!