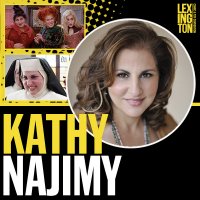 Kathy Najimy is an actor, director, writer, producer, and activist known for her memorable performances in over 25 films and over 100 television projects.

Najimy is very proud to have been named Ms. Magazine Woman of the Year and The NY Lily Award for Actress/Activist of the Year 2016.

Najimy starred as a series regular on A&E’s cop show, “Unforgettable” as the Captain of the NYPD Major Crimes. She currently frequents the TV show YOUNGER and HBO’s “Veep” as Wendy.

She has voiced Peggy Hill for fourteen seasons on the Emmy Award-winning “King of the Hill”, for which she received several awards, and starred as Olive on NBC’s Veronica’s Closet for 3 seasons with Kirstie Alley, and was a series regular on Numb3rs and The Big C.