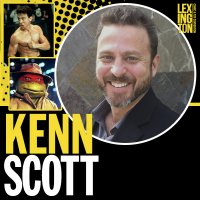 Kenn Scott was born in New York, grew up in North Carolina, and chased his dreams to Hollywood, California. With a lifelong desire to be a movie action hero, Kenn trained in martial arts, took acting classes, and studied film production, until all the work paid off and he found himself playing “Raphael” in the original Ninja Turtles films of the early 1990s. After that, working as a Hollywood stuntman and actor, Kenn appeared and starred in other films, including the martial arts cult hit Showdown. He then moved behind the camera to write and direct for movies, television, and even the CIA! Today Kenn is creative director of Avadel, an advertising agency in Fort Worth, TX. He practices martial arts, plays rock-n-roll, eats pizza, supports causes he believes in, and still loves to travel, meet friends, and visit with turtle fans all over the world.