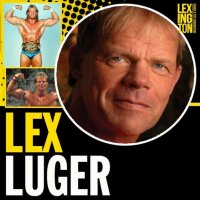 Lex Luger is an American retired professional wrestler, television producer, bodybuilder, and football player. In 2011 he began working with WWE on its wellness policy. He is best known for his work with Jim Crockett Promotions, World Championship Wrestling (WCW), and the World Wrestling Federation (WWF, now WWE).
Luger is a two-time WCW World Heavyweight Champion and one-time WWA World Heavyweight Champion. He is also a five-time NWA/WCW United States Heavyweight Champion who holds the records for consecutive days and total days as champion. He is the second WCW Triple Crown Champion. Although he never won a championship in the WWF, he challenged for every title in the organization (including WWF World Heavyweight Championship matches at SummerSlam in 1993 and WrestleMania X in 1994) and was the 1994 Royal Rumble co-winner with Bret Hart. Pro Wrestling Illustrated readers voted Luger the Most Popular Wrestler of the Year in 1993.