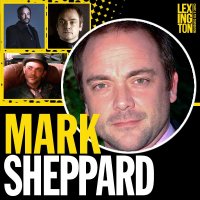 While known primarily for his extensive acting career, Mark Sheppard started out as a drummer in the late seventies with a slew of European Indie bands, playing and recording with The Television Personalities, Nikki Sudden, Robyn Hitchcock, The Barracudas and the Irish group Light A Big Fire among others. Coming to the U.S. in the mid-eighties, he recorded with They Eat Their Own and was a founding member of School Of Fish.

His acting career took of with a starring role in the film In The Name Of The Father, and over two decades of television work followed including The X-Files, Firefly, Battlestar Galactica, Leverage, 24, Warehouse 13, White Collar, Chuck, Doctor Who and 8 seasons of the hit CW show Supernatural. On stage, he has won several theatre awards, including The 1992 Drama Critic’s Circle Outstanding Achievement Award for his performance in “A Cock & Bull Story”.

Circumstances have come full circle and Mark has been recording and playing extensively across North America and Europe with Robyn Hitchcock and His LA Squires.