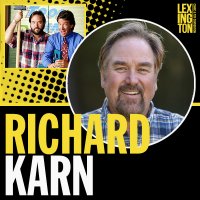 Richard Karn is an American actor and game show host. He is best known for his co-starring role as Al Borland in the 1990s sitcom Home Improvement and his tenure as the fourth host of Family Feud from 2002 to 2006.

After earning his drama degree in 1979, Karn moved to New York City, where in less than one week he was hired to do a commercial for Michelobbeer that was featured during Super Bowl XIV.

In 1989, his wife Tudi convinced him to move to Los Angeles. After receiving a traffic citation, Karn attended a traffic school and sat beside an agent who told him about casting for the new television show Home Improvement. Karn was a guest star in the pilot episode but became a regular cast member playing Al Borland when the show was picked up by the network. Home Inprovement became one of the highest rated shows on television for eight seasons.

In 2002, Karn replaced Louie Anderson as the fourth host of the game show Family Feud, which he hosted for four years.

Karn appeared in several of the Air Bud/Air Buddies films as Patrick.

Karn has also guest-starred on many popular TV shows including That 70s Show, Recess, Boy Meets World, Last Man Standing (where he reunited with Tim Allen) and most recently Comedy Central’s Detroiters and Hulu’s PEN15.