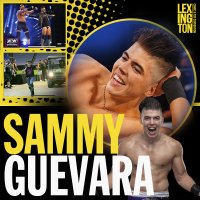 Sammy Guevara is a Cuban-American professional wrestler signed to All Elite Wrestling (AEW). Guevara began work as a professional wrestler in 2010 and was trained in Booker T's school Reality of Wrestling. For several years, he wrestled for several independent promotions in the United States, such as Major League Wrestling (MLW), Evolve Wrestling, and Pro Wrestling Guerrilla (PWG), as well as international promotions like DDT Pro Wrestling. In 2018, Guevara appeared on the 4th season of Lucha Underground, a pro wrestling TV Series produced by the Mexican promotion Lucha Libre AAA Worldwide (AAA). Due to his work in Lucha Underground, he started to wrestle on AAA, where he became AAA World Cruiserweight Champion.
In 2019 Guevara signed with the newly created American promotion All Elite Wrestling, where he became one of the founding members of The Inner Circle stable alongside Chris Jericho, Jake Hager, Santana and Ortiz