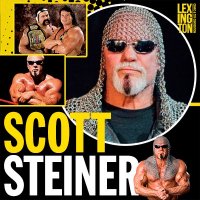 Scott Steiner is an American professional wrestler,Steiner wrestled in World Championship Wrestling alongside his older brother Rick as The Steiner Brothers and as a member of the New World Order (nWo). He also wrestled for Jim Crockett Promotions, the World Wrestling Federation / Entertainment and Total Nonstop Action Wrestling. In the 1990s and 2000s, Steiner competed in pay-per-view main events in the WWF, WCW and TNA.