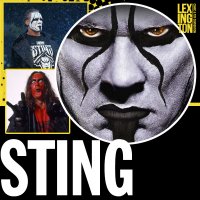 Sting is an American professional wrestler and former bodybuilder, currently signed to All Elite Wrestling (AEW). He is regarded as one of the greatest professional wrestlers of all time, having cultivated a legacy over a career spanning five decades. He is a fourteen-time world champion having competed in WCW, NWA, TNA and WWE.
Sting is widely known for his time spent as the public face of two major American professional wrestling promotions: the now-defunct World Championship Wrestling (WCW), which was bought by the World Wrestling Federation (WWF, now WWE) in 2001, and Total Nonstop Action Wrestling (TNA). Although WWF had purchased WCW, Sting did not sign with them at that time.
Sting's 14-year association with WCW and its predecessor, Jim Crockett Promotions (JCP), began in 1987. He quickly rose to main event status and has been described as the WCW counterpart to the WWF's Hulk Hogan. Dubbed "The Franchise of WCW", he held a total of 15 championships in the promotion – including the WCW World Heavyweight Championship on six occasions, the WCW International World Heavyweight Championship on two occasions, and the NWA World Heavyweight Championship on one occasion – and made more pay-per-view (PPV) appearances for the company than any other wrestler. Against Hogan, Sting headlined the highest-grossing PPV event in WCW history, Starrcade, in December 1997. Upon the acquisition of WCW by the WWF in March 2001, Sting and his long-term rival Ric Flair were chosen to perform in the main event of the final episode of Nitro.[6] Sting would later face Hogan and Flair in their last televised matches, defeating both.
Following the expiration of his contract with WCW's parent company, AOL Time Warner, in March 2002, Borden held talks with the WWF, but ultimately did not join the promotion and instead toured internationally with World Wrestling All-Stars (WWA) – winning the WWA World Heavyweight Championship – before joining the then-upstart TNA in 2003. Over the following 11 years, he won the NWA World Heavyweight Championship on one further occasion and the TNA World Heavyweight Championship four times. As a result, he became the only wrestler to have won the NWA, WCW, and TNA World Titles in a career. He was also the inaugural inductee into the TNA Hall of Fame in 2012.
Previously described by WWE as the greatest wrestler never to have performed for that promotion, Sting finally joined WWE in 2014, making his first appearance at Survivor Series and having his debut match at WrestleMania 31 the following year. His last match in WWE came at Night of Champions in September 2015, which also marked his sole WWE pay-per-view main event for the WWE World Heavyweight Championship in the organization, losing to Seth Rollins. Sting headlined the WWE Hall of Fame class of 2016 on April 2, where he announced his retirement. His induction rendered him the second performer to be inducted while still an active WWE wrestler, after Ric Flair. In late 2020, Sting signed with AEW, coming out of retirement and had his first match in over five years at the promotion's Revolution pay-per-view on March 7, 2021, a tag team cinematic Street Fight that he and Darby Allin won. Sting then had his first live wrestling match in over five years at Double or Nothing on May 30, 2021, another tag team match that he and Allin won.
Sting held 26 total championships throughout his career, including 21 between WCW and TNA. Readers of Pro Wrestling Illustrated named him "Most Popular Wrestler of the Year" on four occasions, a record he shares with John Cena. In 2016, Sting was inducted into the Wrestling Observer Newsletter Hall of Fame. Slam! Sports wrote that he holds "a lofty level of prestige that few will ever touch."