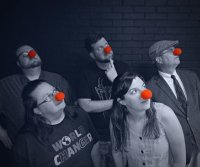 Founded in 2017, the Chickasaw Civic Comedy Players (3CP Improv) made Chickasaw Civic Theatre the only Mobile community theatre with their own house improv team. The troupe was built on the opening words of Viola Spolin’s Improvisation for the Theatre: “Everyone can act.” They strive to be welcoming to any actors who wish to play and to any audience members who wish to laugh.
About the actors-
Cindy Brady is excited to be performing at Mobicon. In addition to her work with 3CP Improv, she has appeared in numerous shows with Chickasaw Civic Theatre, Mobile Theatre Guild, and Joe Jefferson Playhouse. She has also done several shows with Mobile Mystery Dinners. When not performing, Cindy is a Special Education teacher at Allentown Elementary School.
Steven Castle has been performing improv comedy off and on for over two decades. he was a founder of the Improv Comedy Underground and is a current member of Dad Company Improv, where he’s lucky enough to goof off with his friends while people laugh at–with?–him.
Gage is a dad, a thespian of sorts, and a GenX-er who loves sketch comedy, improv, and literally laughing out loud. Little-known fact, he always dreamed of being a B-movie actor. He has been with 3CP from the beginning and is known for his high-energy style.
Cheyenne Kinzer Gates has a creative spirit with an interest in many things, making her a collector of hobbies. Among other things, she enjoys writing, photography, art, baking, and traveling. She hopes that her creations—whether a story, painting, or delicious treat—spread joy and happiness to others.
Chip Goff has been acting in community productions and making stuff up for the past twenty years in Improv Comedy Underground, 3CP Improv, and Dad Company Improv. He directs plays at St. Paul’s Episcopal School, where he has taught English and Theatre for the past fifteen years. Let me know if this works for you or you would rather something flippant.
Barney March is a respected Mobile attorney and avid performer. He has worked with every Mobile area theatre and when he isn’t learning lines for his next scripted show, he is ignoring them for his next improv show with 3CP Improv or Dad Company Improv. He would like to thank his family for their unending support, and he would especially like to thank Kelly Teague for writing his bio.
Kelly Teague has been fairly obsessed with improv for decades. He performed with Improv Comedy Underground before cofounding 3CP Improv and Dad Company Improv. He is a three-time finalist and two-time winner of the Best Local Comedian Nappie Award (fingers crossed for another trip to the podium in July).
Samantha Teague is the producer and technical director for 3CP Improv. She probably doesn’t know Kelly is including her in the bios but she does amazing work and deserves a bucketload of credit. If she had spare time, she would just fill it with more exceptional work.