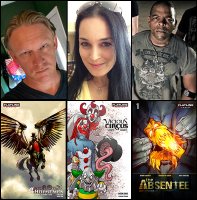 Flatline Comics- Alabama's preeminent comics publisher since 2010! Specializing in horror, science-fiction and fantasy comics, Flatline has had over $200,000 in comics funded on Kickstarter. New comics are published monthly, and they are now offering complete series in signed/numbered Collector Boxes.

Headquartered in Fairhope, Alabama, Kevin LaPorte writes and publishes comics with partner Amanda Rachels. They founded Inverse Press in 2010 and oversee a burgeoning catalog of weird horror comics. The worlds Kevin creates under the Flatline Comics imprint range from the transformative big top of Vicious Circus to the Steampunk Apocalypse of Last Ride of the 4 Horsemen to the demon-possessed starscape of The Absentee.

Amanda Rachels' love of horror films and comics heavily influenced her own comics work, including horror epics Vicious Circus and Flesh of White, and her very own anthology volumes entitled Amandatory. She regularly provides freelance cover and commission art and, together with partner Kevin LaPorte, is a full-time comics publisher at Flatline Comics.

Rando Dixon is a lifelong Mobilian. He works predominantly in the medium of pen and ink line art but branches out into acrylic paintings. After years of freelance graphic design, he started on the road to his dream of becoming a comic book artist in 2012. Since, he storyboarded a number of motion pictures, including Convergence and USS Indianapolis: Men of Courage, and co-created and penciled/inked sci-fi horror comic The Absentee from Flatline Comics.