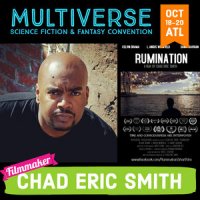 Chad Eric Smith, a native of Washington, DC, is an award-winning actor, screenwriter, film producer, director, and musician. In 2014, he wrote and starred in his film directorial debut, Dark Therapy, a short comedy about a vampire who seeks psychiatric treatment for an extreme and irrational fear of blood. Smith then wrote and directed the short psychological sci-fi drama Rumination, which was produced with his production company MisterDuke Productions, LLC. In 2018, the film screened at over 30 film festivals nationwide and won over 20 awards before being released worldwide on the streaming platforms kweliTV and Trindie TV. In 2019, Smith co-produced and starred in the short sci-fi drama Fatherless, written & directed by William M. Crouch, which will hit the national film festival circuit in 2020. Most recently, the Washington, DC Office of Cable Television, Film, Music, and Entertainment selected Smith as the October 2019 Filmmaker of the Month.

GATHER A (Chattahoochee A)

GATHER BC (Chattahoochee BC)

For more information about the convention, please visit the Multiverse webpage