Reaper U Class Ticket sales are now available for purchase all Admission holders.

If a class is listed as "Sold Out" or "Registration Full", we will have 2 class tickets available for purchase the night before each class. See the Registration Desk at ReaperCon 2019 for more details.

STEP ONE: Purchase your ReaperCon admission ticket? You *must* do that first.

STEP TWO: Go to your email and look for your order confirmation email; it will be titled “ReaperCon 2019 Order Confirmation”.
Click on the grey box that says  “CLICK HERE TO VIEW YOUR ORDER ONLINE AND MANAGE SCHEDULE”

This will take you to your order confirmation page.

STEP THREE: Click on the orange “Register for Classes” button.  Go through the Class Schedule and find what you want. Click the green "Register/Add to Schedule” button. This adds the classes to your Schedule.

STEP FOUR: Use the dropdown menu at the top right corner and go to “My Schedules”; you'll then click on the “View Schedule” button; this shows you what you've registered/scheduled for yourself.

STEP FIVE: You'll see a “Purchase Add Ons” button. Click on that to go to check out. Select the tickets and check out!

Check out this video  for more help: Reaper U Class Ticket Registration 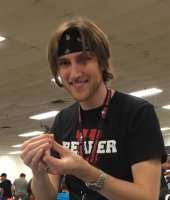 Ian Markon (a.k.a. Kuro Cleanbrush on the Reaper Forums and other online venues) has been a miniature painter since the early/mid 2000’s when he and his younger brothers first discovered the exciting world of miniature wargaming. Over the next few years, Ian discovered that he got much more joy out of painting the heroes and leaders of his armies than the rank-and-file troops, however, and so his focus gradually began to shift. This shift towards the hobby side of miniature painting carried him all the way to his first ReaperCon in 2012 where, as he likes to put it, he discovered that he “didn’t even know what he didn’t know about miniature painting!”. Fortunately, all the classes he took at the convention helped part the clouds of ignorance, and he went home to practice, practice, practice. Two years later, when next he returned to ReaperCon, he had improved immensely and won his very first ReaperCon MSP Open gold metal!
Since that time, Ian has continued to strive towards improvement, and his efforts have been rewarded with numerous awards from various competitions. Now, one of his chief joys in the hobby is getting to return as a ReaperCon instructor in the hopes that the instruction and tips he loves to impart to others might help some of them in the same ways he was helped at that first ReaperCon!