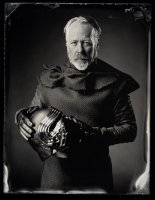 Adam has spent his life gathering skills that allow him to take what’s in his brain and make it real. He’s built everything from ancient Buddhas and futuristic weapons to fine-art sculptures and dancing vegetables.

In 1993, Adam began concentrating his career on the special-effects industry, honing his skills through more than 100 television commercials and a dozen feature films, including Star Wars Episode I: The Phantom Menace and Episode II: Attack of the Clones, Galaxy Quest and the Matrix sequels.

In 2002, Adam was chosen along with Jamie Hyneman to host MythBusters, which premiered on Discovery Channel in January 2003. Fourteen years, 1,015 myths, 2,950 experiments, eight Emmy nominations, and 83 miles of duct tape later, the series ended in March 2016.

Today, Adam stars in and produces content for Tested.com, including behind-the-scenes dives into multiple blockbuster films (including Ghost in the Shell, Alien Covenant, and Blade Runner). He also produces and stars in his “Brain Candy” stage show with Vsauce’s Michael Stevens.

When he’s not on an airplane, Adam lives in the San Francisco Bay area with his wife and their two dogs