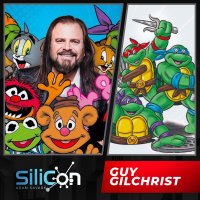 Guy Gilchrist at the age of 24, was hand-selected to create Jim Henson’s Muppets Comic Strip that was printed worldwide in 660-plus newspapers daily from 1981 to 1986. Throughout the years, he has set his hand to such notable cartoons as Teenage Mutant Ninja Turtles, Looney Tunes, Tom & Jerry, Fraggle Rock and The Pink Panther and was instrumental in the creation of The Muppet Babies.

Gilchrist took over the iconic Nancy comic strip in 1995, and 2015 marks his twentieth year drawing Nancy. In 2013 he unveiled a one-of-a-kind exhibit, Nancy Loves Nashville, at the Nashville International Airport that revealed the location of Three Rocks as a suburb just outside of Nashville. Syndicated internationally in 80 countries and some 400 newspapers, Nancy has a viewership of 57 million readers around the world. And as fans of the comic strip know, Nancy resides in the fictional town of Three Rocks with her Aunt Fritzi and friend, Sluggo.

Gilchrist has been recognized and honored internationally for his creativity and authorship. He was awarded the National Cartoonist Society’s highly coveted Reuben Award in 1997 and again in 1998 for Best Magazine and Book Illustrator, for Night Lights and Pillow Fights – Book One and Book Two. Also for Night Lights and Pillow Fights, he was awarded the Bank Street Award for Best Book of the Year – 1998. He is a three-time award winner of the Best Book of the Year from the International Reading Council of the United Nations, for the Tiny Dinos book series. The Tiny Dinos series was among the top bestselling books at Walden Books.

A strong supporter of charities and children, Gilchrist has been honored for his contributions by Vanderbilt Hospital, St. Jude Children’s Research Hospital, Hartford Children’s Medical Center, Shriners Hospitals, and The Angelus. An active supporter and voice for the military and veterans’ causes, Gilchrist has been honored by the armed forces and veterans organizations for his support and work.

Additional information on Guy Gilchrist and his work may be obtained at www.nancyandsluggo.com