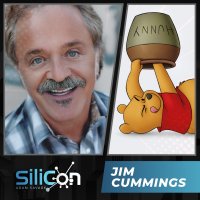 “Tell the kid he’s got it,” said the legendary Mel Blanc with a smile, after listening to a young man’s first demo tape of cartoon character voices. The year was 1984, “the kid,” was Jim Cummings. Since then, the kid has gone on to give life and voice to some of America’s most beloved animal Characters, even a few of the late Mel Blanc’s, and he was even nominated for an Emmy Award for his work as the lovable Tigger on Disney Channel’s “My Friends Tigger and Pooh,” in which he also voices everyone’s favorite bear, Winnie the Pooh.

Born and raised in Youngstown Ohio, Cummings spent Saturday mornings riveted to the TV screen as he mimicked the characters in his favorite cartoons, all the while dreaming that one day he would voice them himself. At age 19, he moved to New Orleans, where he performed as a drummer, a singer, a deck hand on riverboats, and even designed and created Mardi Gras floats, all the while absorbing the rich characters and accents that would someday find expression in animation.

Years later, Cummings relocated to Southern California and managed a video store as he pursued his childhood dream. He gave his first demo to a customer who was also a movie producer, and the rest, as they say, is history. In 1984, Cummings landed his first role as Lionel the lion, in Disney Channel’s “Dumbo Circus.” During his illustrious career, he has worked extensively for the Walt Disney Studios voicing classic characters such as Winnie the Pooh, Tigger, King Louis, Kaa the Snake, Pete (formerly peg legged Pete), and more. His many other credits include Darkwing Duck, Bonkers, Fat Cat, and Monterey Jack on “Chip ‘n Dale: Rescue Rangers,” Don Kamage on “Tailspin,” and too many others to mention here.

Cummings has done scores of voices for Warner Bros, as well, including Taz the Tazmanian Devil himself, Steven Spielberg’s “Animaniacs,” ”Tiny Toon Adventures,” “Batman,” ”Pinky and the Brain,” ”Tazmania,” “Duck Dodgers,” and more. Other credits include “King of the Hill,” “Bump in the Night,” “Adventures of Jimmy Neutron: Boy Genius,” “The Replacments,” “The Addams Family,” “Teenage Mutant Ninja Turtles,” “Star Wars Clone Wars,” “The Simpsons,” “Barnyard,” and “Catdog.” Not Limited to the small screen, Cummings has acted in several blockbuster feature films for Dreamworks including “Shrek,” “Antz,” “Kung Fu Panda’s Furious 5,” “Hook,” “The Bee Movie,” “Balto,” and more. His credits read like a top-list of animated and live-action films. Credits include “Who framed Roger Rabbit,” “The Little Mermaid,” ‘Aladdin,” “Tarzan,” “Pocahontas,” “The Lion King,” “Babe: Pig in the City,” “The Hunchback of Notre Dame,” “Brother Bear 2,” “The Princess and The Frog” to name a few. Cummings’ uncanny ability to sing in character and voice match for stars who are, in his words, “great actors, just not great singers,” has led to many platinum and gold records for soundtracks like “Anastasia,” “The Lion King,” “Fox and the Hound,” “Pocahontas,” “Hurcules,” and more. He was also AC, the lead singer of the famed California Raisins.

As of late, Jim is enjoying being the only American performer in the primary cast of “Gnomeo and Juliet,” where he plays the amorous garden flamingo, Featherstone. He is excited for the release on July 15th of the sequel to the animated Disney Classic, “Winnie the Pooh” in which he plays both Winnie the Pooh and Tigger, too! He will also be playing an evil African Warlord, Budzo, in the upcoming feature film, “Zambezia,” which is being released later this year. Cummings’ work in voice over includes hundreds of television and radio commercials, movie trailers, promos, and videogames. “Pretty much anything involving microphones, music, noise in general, and padded walls,“ jokes the affable actor, and “remember, only you can prevent forest fires,” so says Smokey the Bear, aka Jim Cummings. No matter how busy Cummings, schedule may be, it all stops when Famous Fone Friends of Make a Wish Foundation call on behalf of a very ill child and distraught family in need of a phone call from their favorite cartoon character. “Just bringing a respite, however brief, and perhaps a smile and giggle or two, means so much to the child and their family. I consider it a true blessing to be able to do that.”

Cummings is a proud father of four and resides somewhere in California with his beautiful two younger daughters Grace and Lulu Rose…and their critters.