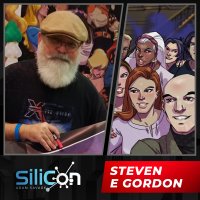 Steven E Gordon’s professional career began in 1977 when he was hired by Ralph Bakshi Productions to work on the animated feature film “The Lord of the Rings.” He stayed with Ralph through several more films was promoted to Animation Director and Key Animator/Character Designer on the Ralph Bakshi / Frank Frazetta feature “Fire and Ice.” After that he landed the unusual entry job of Animator at Disney Pictures animating on “The Black Cauldron” and stayed there for five years. He returned to Bakshi to direct on the groundbreaking “Mighty Mouse” series, and then he spent 12 years working with Rich Animation on a series of direct-to-videos, doing character design and layout and was Animation Director / Character Designer / Key Animator on “The Swan Princess.” He also was key animator of Holli Would on “Cool World” during this period.

After that he was one of the directors and the sole character designer on “X-Men: Evolution.” He then went to Dreamworks Animation as a story artist on “Shrek 2″ and “Over the Hedge.” Then he went on to be a director on Marvel/LionGate as well as the character designer on T”he Ultimate Avengers” and its sequel. Next came the animated series “Wolverine and the X-Men” for Marvel as well as “The Avengers: Earth’s Mightiest Heroes.” In his quest to continue to be employable he started illustrating children’s books based on film and comic characters for HarperCollins (and other publishers) as well as illustrating comics such as the on-line comic for ERB, Inc. “The Eternal Savage™” and “HeadHunter” for SitComics. His work history includes storyboards on “Terminator: Salvation” and the live-action “Jungle Book” directed by Jon Favreau for Disney, as well as storyboards on a variety of animated projects and is in development on an animated series based upon Jimmie Robinson’s “Bomb Queen” with G7 Animation.

Currently he is employed by Dreamworks Animation.