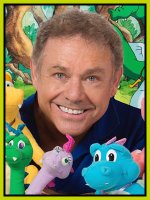 Wesley Eure has an extensive background as an author, television writer, producer, performer, charity fundraiser, lecturer, plus a stage and television director.
Wesley is a veteran television star of two major network series, DAYS OF OUR LIVES (Michael Horton) and LAND OF THE LOST (Will Marshall), an author of five books, the developer of PBS’ number one show for preschoolers, DRAGON TALES, and he hosted Nickelodeon’s #1 game show, FINDERS KEEPERS.
. Wesley is currently co-producing a new Steven Schwartz musical titled SNAPSHOTS. Mr. Schwartz’s credits include WICKED, PIPIN, and GODSPEL.
For eight years he starred in NBC-TV’s Emmy-winning DAYS OF OUR LIVES playing the role of Michael Horton, Jr. He was nominated for Best Daytime Series Actor and is the recipient of Radio-TV Mirror Awards and Photoplay Awards.
Simultaneously he also starred in Sid and Marty Kroft’s popular children’s adventure series, LAND OF THE LOST, which lead NBC-TV’s Saturday morning line-up for three years. After all of his classical training Wesley is now known for the line, “Run Holly! Run! There’s a dinosaur!”
Wesley received top billing in Hanna-Barbera’s delightful comedy, C.H.O.M.P.S., which also starred Valerie Bertinelli, Red Buttons, Jim Backus, Herimone Baddly and Conrad Bain.
For you horror film fans, you will recognize him as the fiendish murderer in TOOL BOX MURDERS and the nasty guy who gets eaten by snakes in JENNIFER.
Wesley movie, Geography Club, won the Audience Award at Outfest 2013 plus he just finished shooting Sins of Our Youth, a new movie starring Ally Sheedy.
His children’s novel entitled THE RED WINGS OF CHRISTMAS, published by Pelican, has been called “the new American classic” by CNN News and was optioned by Disney Studios for a full-length animated feature. The book is also available on audiotape with Wesley reading the 2 hour and 40 minute version.
For many years Wesley was the top fundraiser for the March of Dimes. He was one of the most sought after hosts for Telethons and fund raising campaigns including March of Dimes, Variety Club and The Special Olympics.
Wesley created the celebrity fundraiser LalaPOOLooza in Palm Springs which featured 85 celebrities and raised thousands of dollars for 7 local charities.
Wesley recently was honored with a star on the Palm Springs Walk of Fame.

Land of the Lost