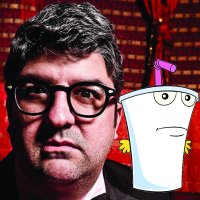 Dana Snyder is a comedian, actor, producer, voice artist, and man about town! He is best known as the voice of Master Shake in Aqua Teen Hunger Force, Granny in Squidbillies, Graballa the Hutt in Lego Star Wars: The Freemaker Adventures, The Penguin in Batman Unlimited and DC Super Friends, The Alchemist in The Venture Bros., Gazpacho in Chowder, Mr. Baldwin in Fish Hooks, Lucas on Your Pretty Face Is Going To Hell, Dr. Colosso on The Thundermans, Todd in Code Monkeys, and Benjamin Franklin in The Young Person’s Guide to History.

You have also heard Dana’s voice as Hork the Nomad in Your Dungeon My Dragon, Leonard in Penguins of Madagascar, Ancient Sleeping Magi of Life Giving and The Train in Adventure Time, Dr. Wang in Minoriteam, Dreadnot and Thunderbite in Robotomomy, Buster Move on Turbo: F.A.S.T. as well as multiple voices in Robot Chicken, Triptank, Bravest Warriors, and Mad.

You’ve also seen him on screen as Strata Operator and Benjamin Franklin in Saul of the Mole Men, Chris in Gary Unmarried, and appearances in ER, Brothers and Sisters, Stomp! Shout! Scream!, Come on Over, Gypsy Crepes, Terror Phone, If You Could Say It In Words and more! His video game credits include Epic Mickey 2: The Power of Two, White Knight Chronicles: International Edition and Aqua Teen Hunger Force Zombie Ninja Pro-Am.