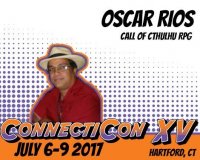 Oscar Rios is an author, editor and publisher of horror fiction and role playing scenarios for the Call of Cthulhu RPG. Oscar has written over eighty Call of Cthulhu scenarios for Chaosium, Miskatonic River Press, Stygian Press, and his own company, Golden Goblin Press (founded in 2013). His work also appeared in The Unspeakable Oath and World of Cthulhu magazine, as well as Yog-Sothoth.com and Shoogoth.net. He dabbles in fiction with short stories appearing in Cthulhu�s Dark Cults, Horror for the Holidays, Undead and Unbound, Heroes of Red Hook, Further Tales of Cthulhu Invictus, and the upcoming Between Twilight and Dawn. In 2016 Golden Goblin Press, took over the Cthulhu Invictus setting from Chaosium, and is relaunching the setting with The 7th Edition Guide to Cthulhu Invictus. He is passionate about promoting inclusiveness and diversity in the Comic Horror genre. At his core Oscar remains an avid gamer, running and playing Call of Cthulhu whenever possible.