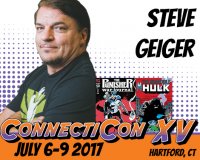 For the past Twenty years Steve Geiger has served as a professional artist in the advertising and comic book fields. After graduating from Buffalo State University, he began his career as an apprentice to the legendary comic book artist John Romita Sr. He was soon hired on staff, and eventually was named Managing Art Director for The Marvel Entertainment Group.

Throughout his career he has served as a regular artist on such comics as Spider-man, The Incredible Hulk , Bloodshot, Scion, Lorelei, and Samuree.

Steve has also illustrated many covers and single issues (“One Shots”) for such titles as The X-men, Punisher: War Journal, The Fantastic Four, Batman, and countless others.

He is now launching his own enterprise, The Evilgeiger Empire, an entertainment development company devoted to the creation, implementation, and production of original content and creator-owned concepts and characters.

Current projects include: The Henchman with Devin Hylton, Gabriel Damascus; Cutter, and Plowboy in the Cornmeal Universe with Hollywood Animation.

Steve lives in Williamsville, NY with his wife Kristy and their son, Steven III.