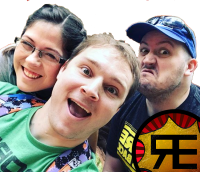 They've burned down Freddy Fazbear's! Made Senpai notice them! Battled Pokémon, escaped Baldi and even broken into the Neighbor's basement! But no matter which video game they're spoofing, Random Encounters can't resist writing a catchy new song to go with it... Come ~randomly encounter~ some of the RE team at Connecticon, where they'll be meeting fans, playing games, and hosting an incredibly wacky sing-along! Step into the tall grass and encounter them early at youtube.com/RandomEncountersEnt.