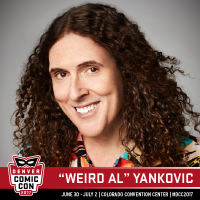 Weird Al is best known for his parody songs such as “Eat It,” “Pretty Fly for a Rabbi” and “White and Nerdy,” but in addition to being an accomplished musician and songwriter, he’s also an actor, director and writer. He has appeared in films such as the cult classic UHF, which he also wrote, and directed music videos for artists such as Ben Folds and the Black Crowes. He has also written two children’s books, When I Grow Up and My New Teacher and Me!

Of his 14 albums, he has four Gold and six Platinum records. Weird Al has been nominated for the Grammy Awards 11 times, winning four.