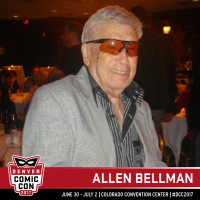 Allen Bellman was born in Manhattan and studied at the High School of Industrial Arts. He eventually became a staff artist at Timely Comics (precursor to Marvel) during the Golden Age of comics. While still a teenager, he did the backgrounds for Syd Shores’ Captain America in 1942, and eventually worked on titles such as The Patriot, The Destroyer, The Human Torch, Jap Buster Johnson and Jet Dixon of the Space Squadron, All Winners Comics, Marvel Mystery, Sub Mariner Comics, Young Allies and Allen’s self-created back-up crime feature Let’s Play Detective. He also contributed pre-Code horror, crime, war and western tales for Atlas Comics, continuing to work in the comics field until the early 1950s.

Allen is available for commissions in advance of Denver Comic Con 2017, by contacting him at allen@allenbellman.com or through his website at www.allenbellman.com.