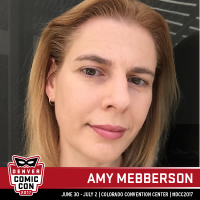 Amy Mebberson is a professional comic artist, book illustrator, designer and fine artist specializing in licensed and all-ages characters. Most of her work has been for the Walt Disney Company and its licensees, including Acme Archives & Hachette Book Group. Amy is also a regular designer for Hasbro, working on Disney and My Little Pony toy lines.

Amy started her career at Walt Disney Animation Australia as a trainee inbetweener. She then moved to the States and continues her association with Disney with comic work for Boom!, IDW and Joe Books. Since then, Amy has produced comics for The Muppets, My Little Pony, Sesame Street, Wonder Woman and Strawberry Shortcake as well as her continued work for Disney and its licensees. Amy is currently illustrating storybooks for Disney Publishing and Little Brown & Co.