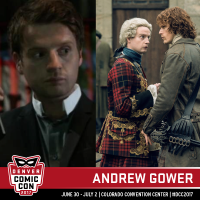 Andrew Gower’s credits include, Bonnie Prince Charlie in the Starz hit show Outlander, Vampire Nick Cutler in the BBC Three’s cult series Being Human, Mark in the BBC’s award-winning Capital, Victor Frankenstein in the BAFTA-nominated Frankenstein’s Wedding, and Jimmy in Rosewater, a film directed and produced by Jon Stewart. He also appeared in Howard Overman’s Misfits, the Starz series The White Queen, and is a regular on the ITV series Monroe.